The paper addresses the issue of the proliferation of the rocket technology deployed in guerrilla warfare throughout the Near East. It evaluates assumptions and identifies potential regressions with respect to the most recent hot phase in the violent conflict between Hezbollah and Israel, with a focus on primary methods based on rocket shelling and resistance efforts. In comparing the two military forces, Israel emerges as the stronger, even if artillery and tactical ballistic missiles with warheads containing substances defined as weapons of mass destruction were to be deployed as an extreme first measure by Hezbollah, in which case an Israeli or American response would destroy at least parts of Lebanon. 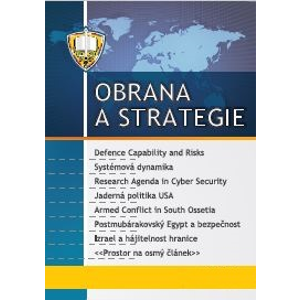 Born in 1986. Studied history at the University of Pardubice. Takes an interest in military history, from World War II to modern warfare and specializes in military technology used in Third World countries in particular. Has long been monitoring the situation in the Near and Middle East. Has published numerous articles and illustrations on hand-held firearms since 2013.